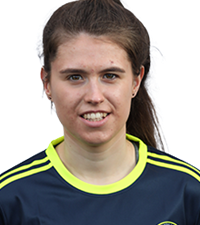 Formerly with Linfield Ladies, Naomi made the switch to Sion in the summer of 2021. Made her debut for Linfield as a 16-year-old in a 7-0 win over Cliftonville in April 2017 and went onto establish herself as one of the mainstays of the Blues defence. Was been in the Linfield panel for three successive European campaigns and capped by Northern Ireland at U17, U18 and U19 level.