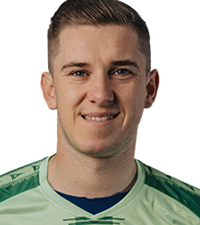 Gareth initially joined the Bannsiders on a short-term loan deal before making the move permanent at the start of the 2020/21 campaign. A former trainee at Queen’s Park Rangers, the shot stopper won three league titles, an Irish Cup and League Cup during a seven year spell at Linfield. He will hope to cement his place as a number one goalkeeper during his time at The Showgrounds.