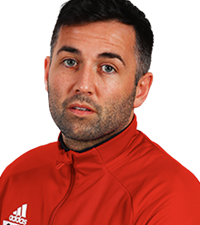 The vastly experienced midfielder is now in his fourth season with Annagh United.

Was on Portadown's books as a youth before signing for Scottish club Gretna, going onto play for Dumbarton on loan and feature for Raith Rovers. His career then took him to York City before a return to Northern Ireland brought time at Newry City, Glenavon, Glentoran and Portadown for a second time.