An Introduction to Sports Chaplaincy

Within the Northern Ireland Football League at every club there is a myriad of talented people behind the scenes supporting the players week in and week out. From the manager, in the front line and his coaching and medical staff, the administrative staff, the scouts, the sponsors, the tea ladies, those who launder the kit, the groundsmen - the list goes on. Among these is the Club Chaplain.

The Sports Chaplain is increasingly becoming part and parcel of club life across the spectrum of not just football, but sport as a whole. The majority of the NI Football League clubs now have an appointed club Chaplain.

Sir Alex Ferguson, former Manchester United manager, said: "Chaplains can be of help to all sorts of people involved with sport, when crisis, need, or difficulty comes. I commend the idea of sports chaplaincy and the work of Sports Chaplaincy UK to you.”

Glentoran captain, Marcus Kane said: "Our club chaplain helped me to gain a unique perspective on issues I had. He went above and beyond for me in my time of need."

Northern Ireland International Megan Bell said: "There are so many things people don’t see going on in an athlete’s life away from the playing arena – and this is where the chaplain can play a pivotal role."

NIFL CEO and former Cliftonville chairman, Gerard Lawlor said: "Whilst I was chairman of Cliftonville FC, we benefited enormously from having Dario as chaplain and he has been of value to not only the players and staff but also the board."

David Healy, Linfield Football Club manager and Northern Ireland record goalscorer, said: "The value a club chaplain brings in supporting players and staff alike across the journey of life is something that we as a club have seen the benefit of and I commend the work of Sports Chaplaincy UK and Ireland within sport"

Marc Smyth, Head of Academy at Cliftonville FC and former Cliftonville FC captain, said: "Everyone in a football club environment needs support and encouragement at some point on their journey and David has provided a welcome layer of support to everyone at Cliftonville in the Academy set up."

Declan Caddell, Head of Academy Crusaders FC, said: “In over 15 years as a player and now head of Academy at Crusaders FC, I and many at the club have benefited from the listening ear, care and compassion given by our chaplain Ken who has been an ever present help in trouble and an encouragement throughout."

Jordan Stewart, Linfield FC player, said: "I was going through a difficult spell in my life with the loss of my sister and the decline of my performances on the pitch. Meeting with our club chaplain really helped me gain a fresh perspective on life and faith and his friendship I still value to this day."

Ethan Galbraith, Manchester United and Northern Ireland player, said: "William was a tremendous help to me through challenges in my life and career and having an international team chaplain available all year means no matter where I play my club football, he is there for me. Highly recommend this support to all players.“

Marissa Callaghan, Cliftonville and Northern Ireland captain, said: "Being part of an international set up is an incredible experience. And of course it brings challenges along the way through injury and the disappointments that come around selection. We all need support on that journey and our chaplain Tracey has been a constant scource of encouragement to all the girls year round and has been amazing for us."

Raymond Crangle, Irish FA senior referee, said: "Being a referee brings its challenges just like it does for players and managers - we are all out there in the spotlight. And we all still have lives to lead away from the game. We are glad to have our chaplain Mark with us on our journey over the past few years. He has provided a listening ear, healthy input and has been a source of support for a number of the senior referees.”

Michael McShane, Head coach Ards FC Disability Team, said: "Everyone within the Ards FC set up have been terrifically encouraged and benefited enormously from the terrific support of our club chaplain Sam. Throughout our journey as a team, Sam has seamlessly enriched our close-knit support network for the players and staff alike.“

Conrad Kirkwood, Irish FA President, said: "The Irish FA are proud to endorse and recommend this important and practical service provided by SCUK which has been made available to all Football Clubs in Northern Ireland and which we at the Association continue to benefit from."

Sports Chaplaincy UK (SCUK) has had the privilege of serving UK sport for over 25 years.

The charity started by John Boyers whilst serving as chaplain at Watford Football Club and who went on to become chaplain at Manchester United has been in existence for many years. They provide support to around 70% of the professional English and Welsh football clubs, plus almost  all the professional and semi professional Scottish and Northern Irish Football League clubs

So what is Sports Chaplaincy and what exactly does a club chaplain do?

Sports Chaplaincy is a Christian charity primarily aimed at the care and welfare of players and staff but also at the wider community of people within the club including supporters and families of players and staff. In the competitive world of sport it is recognised that there is a need for high quality pastoral and spiritual care regardless of age, ability or gender.

Working professionally, caring sensitively, demonstrating integrity and maintaining confidentiality are all the hallmarks of the Club Chaplain. Compassionate and resilient ,  each chaplain will bring with them a vast range of skills, knowledge and expertise to help build perspective and navigate individuals through areas such as uncertainty , injury and identity.

Chaplains are extremely supportive and bring a non-judgemental, listening ear and an empathetic and compassionate presence . As chaplains’ journey through life with all the staff at their club, they are able to provide pastoral support and spiritual care to everyone irrespective of faith tradition or no faith , through all the difficulties and challenges that life brings as well as being an encourager to all.

Sports Chaplaincy UK is the charity that trains, supports and helps facilitate the work of club chaplains within each setting. To this end, each chaplain will receive training covering issues ranging from safeguarding to the unique role of being a professional sportsperson and everything in between including specialised training in areas such as  bereavement, trauma, addictions, family care , anxiety and stress and mental well being . They  also partner and work with other organisations such as Sporting Chance, State of Mind and Care for the Family to ensure that individuals have access to the very best specialist care.

Download the new booklet from Sports Chaplaincy UK and the Mental Health Foundation to support the wellbeing of Elite and Dedicated Athletes in Northern Ireland and Wales. The booklet primarily deals with managing uncertainty, identity and injury, but is also packed with helpful tips and avoiding unhelpful coping strategies and the importance of the club chaplain. 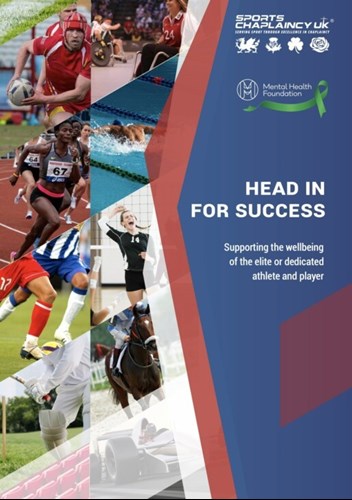