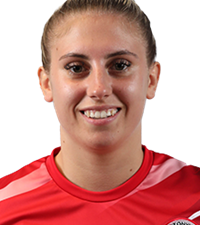 Joined Cliftonville in July 2021 and became a mainstay of the Reds' defence. Kelsie had previously spent two spells with Linfield after initially making her breakthrough back in 2016. Burrows played for Blackburn Rovers in the English Women's Championship, clocking up four league appearances, whilst at university. Capped by Northern Ireland at U17, U18, U19 and senior level.