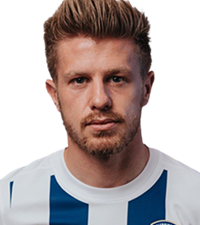 Lyndon Kane made his debut for the Bannsiders in October 2014 against Glentoran and has cemented his place as one of the first names on the team-sheet. The full-back is strong in the tackle and loves getting forward. Has represented Northern Ireland at under-age level and is a lifelong Coleraine supporter. Missed a large part of the 2017-18 campaign and 2018-19 season due to injury but lifted his first piece of silverware in 2020 as Coleraine won the League Cup against Crusaders.