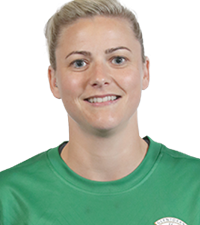 Began her career with Linfield before joining Glentoran as far back as 2009, spent a couple of years in Australia playing for Northern Redback WSC but rejoined the Glens in 2017. Capped many times by Northern Ireland, including five appearances in the historic European Championship qualifying campaign.