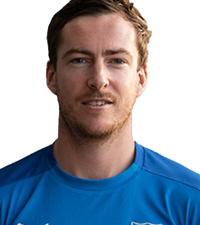 Versatile McGrory joined Ballymena United in 2018 and can do a job at almost anywhere on the right hand side of the pitch. Originally at Linfield, he made his senior debut from the bench as the Blues defeated Kilmore Rec 11-0 in the County Antrim Shield semi-final in October 2010. Following a nasty injury he signed for Ballymacash Rangers but bounced back emphatically, joining Glenavon in 2011. During his time at the Lurgan Blues he won two Irish Cups. In the summer of 2018 he was snapped up by former boss David Jeffrey for Ballymena United and was part of the Sky Blues side that were Premiership runners-up in his first season.