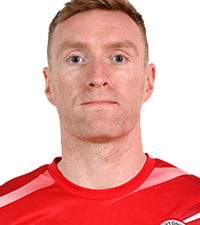 Curran made his debut for the Reds against Celtic in the summer of 2013. The former Manchester United man, who joined from Ballinamallard United, won the Danske Bank Premiership title in his first season at Solitude in 2013/14. Curran, who started as an out-and-out winger, has also excelled in other midfield roles in recent years and was made club captain of the North Belfast side in 2017.