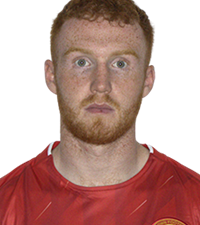 First coming to prominence with Portadown, Lee captained the Ports to the 2017/18 Championship Development League title and was capped by Northern Ireland at youth level.

Signed for Dungannon Swifts in time for the 2018/19 campaign, the centre-half spent several spells on loan with Loughgall before making the switch to Annagh United just before the curtailment of the 2019/20 season.