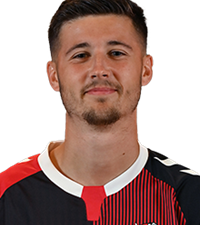 Doyle signed a two-year professional contract with Linfield in May 2018 and the forward made his debut for the Blues as a substitute in an 8-0 League Cup win vs Moyola Park in August 2018. Doyle, who is also formerly of Crusaders’ Youth Academy signed for Warrenpoint Town in the summer of 2019 on a loan deal until January which was then extended until the end of the season. He rejoined The Point in January 2021 on a loan deal until the end of the season.