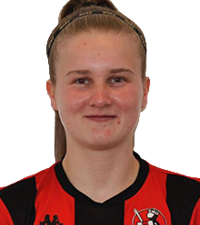 Courtney kicked off her career at Carnmoney before coming to prominence following eight years with Crusaders during which time she played out of defence and worked her way through the Northern Ireland youth ranks. A move to Linfield - and a switch to the right side of midfield - came at the beginning of the 2021 campaign.