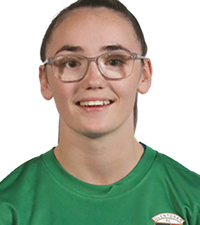 A left-back, Cara has stepped seamlessly into the first team squad from the U19 Women's Academy side, making her debut in the 8-2 victory over Derry City after previously being included in the matchday set-up an unused sub. Capped by Northern Ireland at U15 and U17 level.