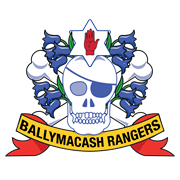 Jordon Morrison bagged all four goals as Ballymacash Rangers twice came from behind to defeat Dollingstown at the Bluebell Stadium.

Jonathan Ewart fired the Dollybirds in front on five minutes, a lead they held until just past the half-hour mark when Morrison grabbed his first of the evening from the spot.

Daniel Gordon edged the visitors back in front just before the break, but Morrison struck again early in the second half with a header from a corner.

He then knocked home another penalty a couple of minutes after that to claim the match ball before bagging his fourth on the hour!