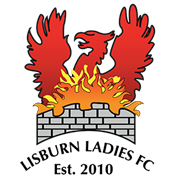 REDS MARCH ON TOWARDS TITLE

Cliftonville Ladies maintained their march towards the league title as they made it 12 wins from 12 league games, but the 4-1 victory over Lisburn Ladies does not reflect how much the Reds were made to work on the night.

The game was scoreless at the break with the visitors – whilst weathering a storm – carrying a goal threat of their own, but the home side’s quality shone through after the break.

Grace McKimm netted twice in the space of ten minutes – the second of which an ‘Olympic goal’ direct from a corner – but Vivienne McCormack halved the lead with a superb lobbed finish for Lisburn.

However, the Reds were to make the points safe as a Toni-Leigh Finnegan free-kick and Erin Montgomery goal wrapped up the win.